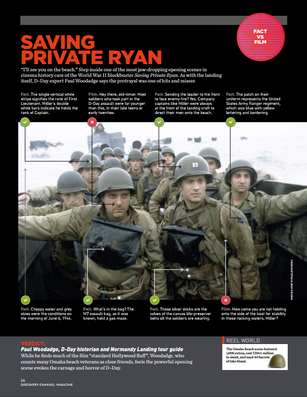 Discovery Magazine article
I offer my services to authors and historians researching the battles of Normandy. If i cannot help myself, I probably know someone who can - it's not always what you know, but who you know!

The Pixar Universe
In September 2020 I was interviewed by MEL magazine about how the Second World War may have panned out in the Pixar Casr universe. Have a read here.

Royal Mail Stamps
In December 2018, I was quoted in a BBC article and the New York Post about the Royal Mail in the UK's forthcoming 75th anniversary of DDay stamp release that used an image from the New Guinea landings in the Pacific, 8000 miles away from Normandy!

Magazine Articles and WWII Projects
In March 2012 I was the credited Historian for a piece about the film Saving Private Ryan for Discovery Magazine. It was just a basic article, but it was a fun thing to do. I have also fact-checked articles for authors and historians from around the World. Click on the image to read the piece.
​
Photographic Research
I am already the unofficial "go-to-guy" for quite a few museums around the world for identification of Normandy locations in 1944 photographs, and I extend this service to all visitors of my website. Amazingly WWII Veterans' photo albums and scrapbooks together with museum archives are still producing hundreds of "new" photos of the Normandy battlefield each year. But in many cases it can be hard to identify specific places, and this is where I am happy to step in. I have hundreds of books on Normandy in my library and I have also explored and toured hundreds of villages and towns in Normandy. My success rate is not 100%, some locations are just too hard to locate, but I am proud of the many locations I have discovered for people and all I need is an e-mail scan of your photo to get to work. Again, if I cannot help personally, I have a network of friends around the region.

It costs you nothing to e-mail me your photos, I may know the location with just one glance in which case I will happily share the location free of charge. If the task is more difficult and needs me to make reconnaissance trips or consult other researchers or archivists then I will of course let you know what this would cost be before undertaking any work.

In previous years I have found the location of bridges constructed in 1944 by Engineers, buildings featured in family photos and even found the names of civilians who appeared in a veteran's photos. Let me get to work on your behalf. 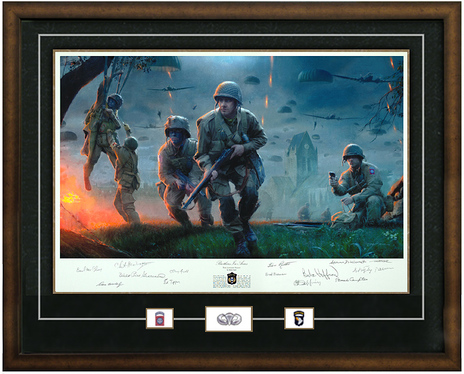 ​Normandy Technical Advice
Whatever your project - advertising, computer game design, toy manufacturer, comic book writer or independent historian, you may be in need of specialist help about the battlefields of Normandy. Books and the internet do of course provide an amazing amount of detail, but there's nothing like having feet on the ground.

Here are a couple of examples of projects I have assisted with. An artist working from a black and white photo of a soldier in a field in June 1944 was painting a colour version. He easily worked out the uniform colours and equipment details, but there were flowers in the grass behind the soldier. I was able to assist with information about what flowers grow in the meadows in June here in Normandy and he completed the painting.

Another artist was working on a portrayal of a paratrooper landing beside a canal. On this occasion I provided photos of the typical vegetation on a canal bank in June and again it helped her finish the painting.
​
In 2010 I worked with my friends Adam and Bryan Makos at Valor Studios on the Brothers in Arms print, pictured right. From taking the initial photos in Ste Mere Eglise, to looking at the artist's proofs I saw the project through to completion. Probably the toughest part was choosing a time for the hands on the church clock face. We were attempting to portray several hours of activity into one picture, so it was not an easy decision.

I also helped with two more releases by Valor, namely "Into the Night" By Matt Hall and Sainte-Marie-du-Mont by Gil Cohen. In both cases I took the modern photos and helped with the placing of the figures and details depicted in the finished paintings.

Whatever your needs may be, just e-mail me with what you are looking for and I will see what I can do to assist you.