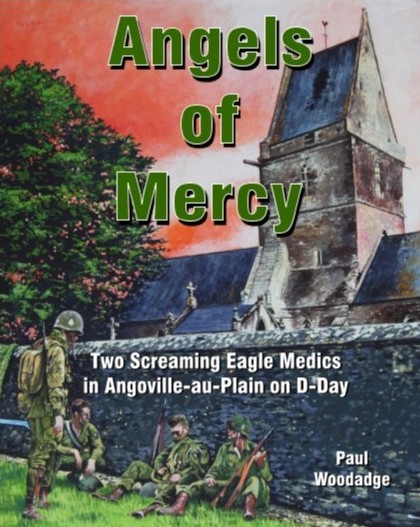 .​Angels of Mercy
In April 2013 I published the first in a series of books I am calling Normandy Combat Chronicles. The first volume is entitled Angels of Mercy and relates the history of the village of Angoville-au-Plain, in WWII. The story had fascinated me for a decade and although a basic version of the tale had been available for years, the complete story was not known. The book covers the extraordinary deeds of two 101st Airborne Screaming Eagle Medics on D-Day, June 6th, 1944. Angoville-au-Plain is a tiny village between Utah Beach and Carentan, where these two medics treated over eighty casualties - American, German and French inside a 12th Century church. My research partners and I spent a long time collating the testimonies of American, French and German participants and over the winter of 2012 I wrote the book. The paperback book consists of 242 pages and includes over 200 black and white photos, many previously unseen. The book does not just cover the story of the medics, but tells the wider tale of the village in WWII, the occupation, the bombings and the eventual liberation. Here is my Facebook page about the book

Buying the book
The book is available online from my Publishers directly at CreateSpace. It is available from Amazon.com, and other internet retailers in the USA. It is also for sale at Amazon UK and other online book stores in the UK. The French language edition will be available sometime in 2017. Finally, I usually have copies for sale with me when I am touring in Normandy.
​Book Reviews
Here are some reviews/comments about the book:
​
"Paul Woodadge has a laser-like instinct for detail. As one of the world's foremost battlefield experts, he knows every nook and cranny of Normandy. Brilliantly illuminated and well-researched, Angels of Mercy tells a previously lost chapter of WWII history. It is a great read that captures the stories of the participants and honors their valiant efforts."
Patrick K. O'Donnell – DOG COMPANY: THE BOYS OF POINTE DU HOC

"A fascinating look at a heroic action in WWII by the best battlefield guide in the business."
Alex Kershaw - THE BEDFORD BOYS and THE LONGEST WINTER

"Paul Woodadge brings those desperate days of June 1944 in Normandy to life again in this fascinating and moving tale. This is intimate history, as the participants experienced it, American, German, and French, written by one of our finest battlefield experts. If you want to know something about what the Normandy fighting was really like, you should read this book."
John C. McManus - THE AMERICANS AT D-DAY and THE AMERICANS AT NORMANDY

“With this book, Paul Woodadge has narrated one of the most powerful stories to unfold on the drop zones of the Normandy invasion.  His unmatched expertise of the subject has informed this account with a vividness that cannot be found anywhere else, and sets the tone for our understanding of what happenedat Angoville-au-Plain.  As the generation of veterans of WWII recedes from living memory, work such as this will gain increasing stature and influence in the scholarship of this conflict. Paul Woodadge is to be commended for applying his formidable skills as an historian to a tale that needed to be told.”
Martin K. A. Morgan - DOWN TO EARTH and THE AMERICANS ON D-DAY: A PHOTOGRAPHIC HISTORY OF THE NORMANDY INVASION

“Paul Woodadge has created a superb book. It is a tremendous addition to our understanding of the momentous events that occurred in Normandy in June 1944."
Joseph Balkoski - OMAHA BEACH and BEYOND THE BEACHHEAD

"This well-researched book describes in great detail, the bloody losses sustained by paratroopers of the second battalion, 501st Parachute Infantry Regiment, of the 101st Airborne Division, in the first crucial 48 hours of the D-Day Invasion. The efforts of this battalion succeeded in halting and disrupting German forces east of Saint-Côme-du-Mont, France. Their heroic sacrifices prevented substantial German reinforcements from attacking the US sea-borne units, which were debarking on Utah Beach. Paul Woodadge's vivid account brings to light a series of actions, by medics and combatants alike, which have been too-long ignored in previous WWII literature."
Mark Bando - VANGUARD OF THE CRUSADE and AVENGING EAGLES

“Paul Woodadge has created an amazingly informative and accurate piece of history which I found completely absorbing and totally fascinating.”
Ian Gardner - TONIGHT WE DIE AS MEN and DELIVER US FROM DARKNESS

"This is the story of one of D-Day's most inspirational battles; one set in a church and fought by two American medics. In this fresh and powerful book, Paul Woodadge gives a voice to old heroes and a soul to one of World War II's holiest of sites, the church at Angoville-au-Plain."
Adam Makos - A HIGHER CALL

“Internationally recognized D-Day historian and tour guide Paul Woodadge vividly tells the riveting story of Angoville-au-Plain, the French hamlet where one of the most inspirational stories from June 6 1944 took place. After landing in the middle of the night, off-target and without their equipment, American medics Bob Wright and Kenneth Moore, made their separate ways to a town that lived sleepily for two millennia and established an aid station in the thousand year old church where, over three days, they treated over 80 soldiers from both sides and faced down death repeatedly. The book reads as if Dashiell Hammett was a historian, as Paul gives life to the men who fought there, the desperate and brave townspeople who woke one night to fighting in their midst and even the church whose pews are still stained by the blood of the wounded. In the end, Paul gives us a unique perspective that is not just about the brutal combat, but is more a touching story about the people themselves: the men, women and children who made and, gratefully, shared, the history. Especially importantly, Paul devoted to telling the story through the words of the participants themselves and he unfailingly treats fact and rumor seriously, which distinguishes him from many other authors. Paul’s status as a historian and tour guide is secondary to his devotion to, and admiration of, those who sacrificed. This is an absolute must read by itself for the messages of humanity and sacrifice, and is invaluable for any historian trying to better understand the desperate fighting of those early days in June 1944"
Dalton Einhorn - TOCCOA TO THE EAGLE'S NEST 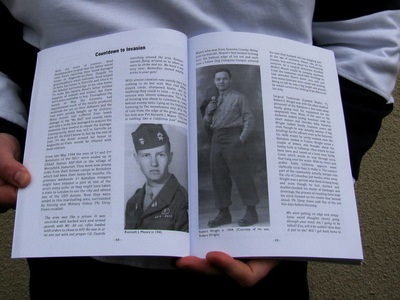 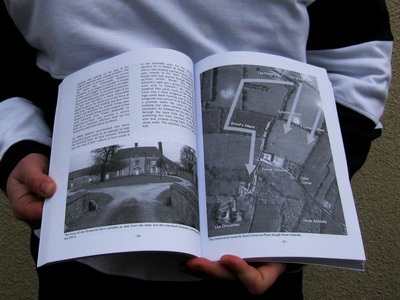 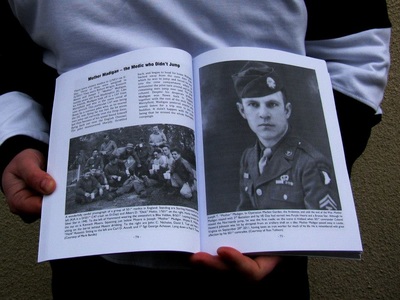 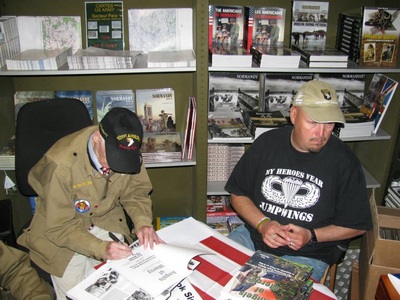 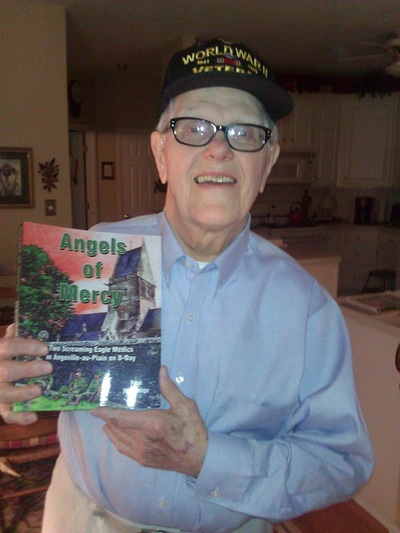